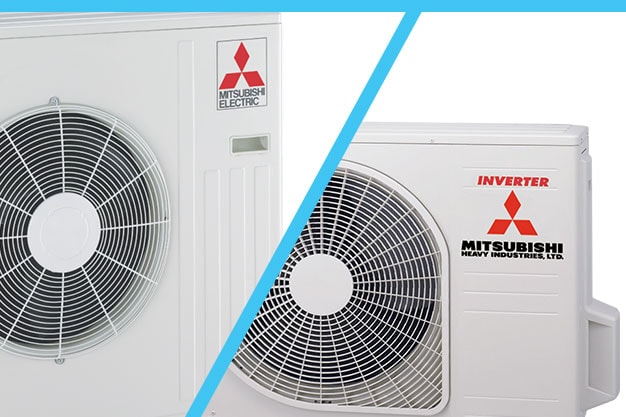 For lots of consumers, the process of buying an air conditioning unit can be downright confusion. But add similar-sounding brand names to the mix, and it's enough to make your head spin. At Hello Breeze, we want to make the decision easy for you. That's why we're here to offer some clarity about two of our best-selling brand names.

Get a Fast Air ConQuote Today!

When it comes to a full-scale Mitsubishi Heavy Industries vs Mitsubishi Electric match-up, we're not so much looking at which one is better but which is most suitable for your living situation. In a way, the whole thing is a lot like shopping for a new car. There are lots of different styles, models, and price ranges, but only you can decide which is the "perfect" vehicle for your purposes.

Let's start out by taking a quick look at the background of the companies in order to learn the difference between Mitsubishi electric and heavy industry. After that, we'll drill down and do a Mitsubishi Heavy Industries review and a Mitsubishi Electric review and see how each company's products excel in particular areas.

Are They the Same Company?

You're probably saying to yourself, "What's going on? These companies both have Mitsubishi in their names. Does that mean it's one company making all these products?" It's a fair question. The short answer is that they are two completely separate companies. In fact, they're competitors.

The key difference between Mitsubishi electric and heavy industry is that, even though they sprang from a common source, they make competing air conditioning products and sell them around the world. The products are not the same. They come with different warranties, prices, features, and other characteristics.

Fortunately for Australian buyers, we have the choice to buy either one. In some places, you can only buy MHI or ME products, not both. And, of course, there are a few places where you can buy neither. So, we're lucky here in Australia. We have a wide range of choices when purchasing air con units.

It all started in 1870 with the founding of the Mitsubishi Shipbuilding Company. Then, by 1921, the ship builders decided to spin off a separate electric company called Mitsubishi Electric Corporation. They mostly built electric motors for use in large ships.

A few years later, the shipbuilding company changed its name to Mitsubishi Heavy Industries, at which point Mitsubishi Electric became its own, free-standing entity. Ever since then, MHI and ME have been rivals in several product markets, notably heating and air conditioning. So, even though they originated from the same parent corporation, today they are completely separate rivals.

What is ME known for. In short, they have spent many years carving out a reputation for themselves by adding quality and technology with each new product they produce. As one of the top, most respected makers of air con units in the industry, Mitsubishi Electric is known worldwide for durable, long-lasting units that are of the highest quality, come with some of the highest technology available and are competitively priced for individuals and business owners.

Here's a short list of what you get when you purchase a ME product:

It only makes sense that because Mitsubishi Heavy Industries is a key rival of Mitsubishi Electric, it would feature a very similar offering of models. It's also true that MHI has spent decades creating products for heating and cooling that are highly reliable, durable, feature advanced technology, and are of excellent overall quality. The company also prides itself on excellent customer service and making some of the largest, commercial HVAC models available.

What do you get when you buy a Mitsubishi Heavy Industries air conditioning unit?

You can look at the list of benefits for each company's products, above, and decide for yourself. There's really no "winner" because every consumer has different needs and preferences. Both companies offer high-tech, high-quality selections in a wide variety of sizes. That way, no matter the size of the space you want to heat or cool, there's something in the ME or MHI lineup for your particular needs.

This is a block of text. Double-click this text to edit it.
Get a Fast Air Con Quote Today!
We Just Need A Few More Details